Do you ever hear people yelling, “More Cowbell,” and wonder what’s taking place?

The request comes from a reference to the song Don’t Fear The Reaper, as made famous by Blue Oyster Cult. Written and sung by Donald “Buck Dharma” Roeser in 1976.

The song is just as famous for its progressive guitar playing as the infamous cowbell track. In fact, the timeless guitar hook that begins the song is instantly recognizable, and a crucial riff found in Don’t Fear The Reaper Tabs.

While many beginner students are intimidated by the rhythmic picking of this intro riff, after examining the notes from Don’t Fear the Reaper tabs people are often surprised at the simplicity of the part.

This section is based around an A minor, G, F, G progression with an open G pedal tone, and with some practice can be mastered by beginners. As the song progresses, intermediate guitar players can find appropriately challenging guitar parts to learn as well. 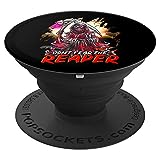 These more challenging sections are for players wanting to learn guitar in the style of 70’s progressive rock, where there are often drawn out solo sections and complex rhythms.

If one breaks down the bridge section of these Blue Oyster Cult tabs, there’s a 12 measure phrase of 96 eighth notes being played by one guitar, and a solo by another.

To learn guitar rhythm sections as complicated as this one, the best strategy is to break it into sections. For the Don’t Fear The Reaper bridge section, there are three sections with about 12 measures long. After learning each of these sections, the Don’t Fear the Reaper guitar solo is a must-know for lead guitar players.

The lead guitar section features an unusual guitar scale: the G Phrygian with a major third, or B natural note. This scale model, often referred to as a Spanish Phrygian mode, gives the solo an exotic flavor.

The addition of string bends and stylized trills can give lead guitar players some new ideas to incorporate into other styles as well.

Guitar Fretboard: Memorize The Fretboard In Less Than 24 Hours: 35+ Tips And...
Buy on Amazon

Dissecting the notes from a good set of Don’t Fear the Reaper tabs will teach a guitar player clever guitar hooks, some new guitar scales, call and response technique, and how to play a true guitar classic.