Introduced as a cheerful, anthropomorphic black mouse with red shorts, yellow shoes, and white gloves, Mickey Mouse is probably one of the most recognizable animal characters that have been featured in comic books, movies, television series, and other merchandise by the Walt Disney Company.

Due to the popularity of Mickey Mouse, his character has been featured in many video games, hands-on game products, and interactive toys, among others.

The toy is well constructed. You can see it from the way the doll is built. You are likely to find no loose, small parts that could pose choking hazards. Even teenagers and adult Disney fans would love having the Disney rock star mickey to add their collection.

Children ages 2 years & up would love to listen and watch Mickey kicks across the floor. Mickey will be happy to teach you new moves as well as classic ones to get you a step ahead of your dream of being a rock star! You can bob your head down while Mickey is singing his new tunes and sometimes dropping into a Mickey-Split. 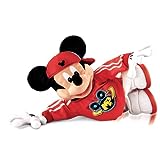 Unlike many other plush Mickey toys, that only work as objects of affection for our little ones, this Disney rock star mickey mechanic plush toy works to get the children off the couch and listen to Mickey’s new tunes.

You can press his right foot and mickey would perform his classic rock tune, “You Really Got Me.” Simply press the right foot once more to see how mickey sings “M to the I Rock Star Remix.” Get the children to watch it jamming on the floor, kicking out his best moves, delivering an energetic performance of genuine rock star while humming clever, mouse-style lyrics.

What if the song were finished before you can learn all his entire moves? Relax, you can press his nose to learn how Mickey kicks or bop his head. It enables children, teenagers, and adults to learn how to move like Mickey by pressing his nose.

In total, Mickey introduces four moves that would get you on your feet. The Head-Bop and the Kick-Step might be the easiest moves, while the Mickey-Split might require more practice from you! Mickey can even play guitar using his snout! To learn his moves, all you need to do is push the nose and follow the steps.

Now you can be a rock star too! You can buy the Rock Guitar which is sold separately, play the guitar, and start a rock duet with mickey. Have you learned how to tune a guitar? Mickey can teach you how by pressing his nose.

When every string has been tuned up, Mickey would be off rocking the world once again, playing cool music, saying phrases, and jamming on his string equipment. Mickey has taught you about how to do classic rock n’ roll moves in style, and it is your turn to show him your moves, and how to do it right!

You can find Disney Rock Star Mickey along with plastic, non-removable sunglasses, a guitar, four AA batteries, and instructions for use. Recommended Ages for 2 Years & Up. 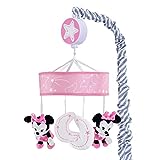 • A couple of classic rock tunes You Really Got Me and M to the I Rock Star Remix.

• Mickey plays the guitar with his nose.

• You can start a band using separate Rock Star Guitar, which is sold separately.

• Requires four A3 batteries, which are included. Phillips-head screwdriver to replace batteries.
Source by Jn Huang