For a start, you can get one for less than £150 and I have to say you get a lot of guitar for the money. For a start, there is a 12 string version along with the standard 6 string.

The Washburn D10S Acoustic Guitar that I tried was straight out of the box so it hadn’t been tampered with in any way. It was exactly the way anyone of us would receive it.

I thought that was the fairest way. So, when I first pulled it my first impression of the finish was that it was good. No noticeable blemishes or runs in the lacquer finish, which looks like a decent thickness and cover.

A good start, but as much as I love to look at guitars it is about the playability and the sound it produces.

So when I first picked it up and put my hands on the fretboard, I noticed that the action was low, much lower than I expected. For me, this was a bonus and not what I was expecting.

The strings looked like they were standard, but pretty awful mediums so I formed a C chord and strummed. Excellent, there was no fret buzz even with these strings.

I think some nice light Elixir strings and the performance could be even better. 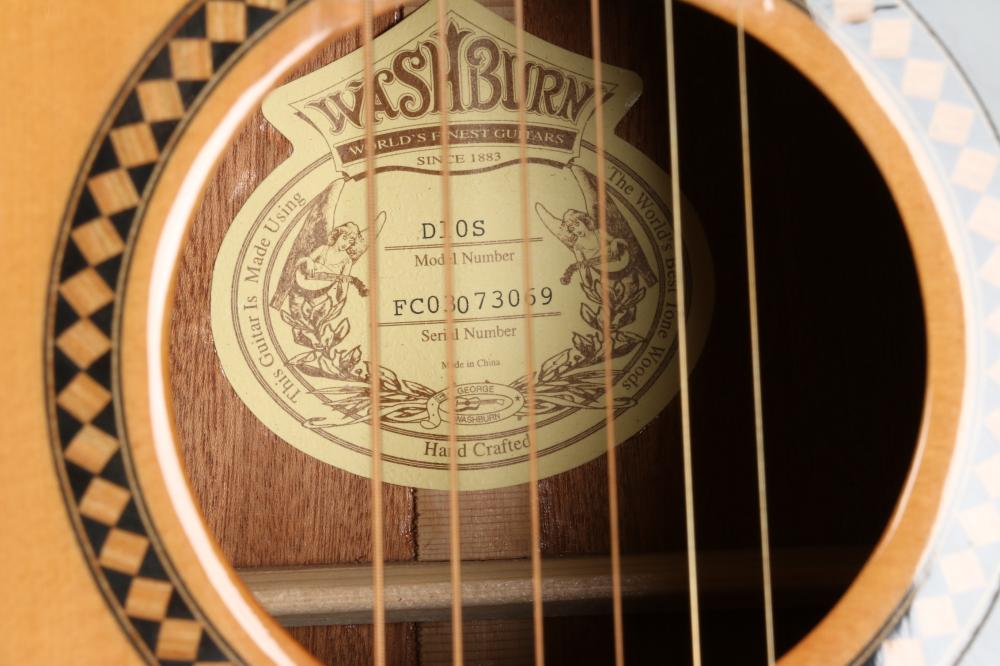 I had a closer look inside the soundhole, which is always a great place to see if there are any signs of shoddy workmanship, but there wasn’t any glue anywhere, very clean.

It looks as though the wood used is of a decent standard with a solid spruce top. The laminated mahogany sides and back keep the price down without detracting from the quality.

The fretboard is rosewood, which is standard so there wouldn’t be any issues there. The frets are not rough and there doesn’t seem to be any dead or unusually raised ones.

The tuners look pretty good and seemed to turn and tune fine. They look like they would certainly be sufficient to hold the strings in tune.

As for the sound, the Washburn D10S acoustic guitar has good volume, a smooth midrange, and some bright highs.

The bass was a little dull, but the thick lacquer finish does not seem to have affected the sustain or tone which, I must say, had worried me a little. There are a plastic nut and saddle which I would probably change to improve the sound further.

There are no electrics to worry about, however, I probably wouldn’t hesitate to splash out to fix a decent pick-up.

In summary, my experience with the Washburn D10S has been a thoroughly positive experience. The guitar seems to represent great value for money. With Washburn having the bestselling acoustic guitar in the world it appears that I am not alone in this either.
Source by Oliver Clark