Now This Is Wild: Before the Troggs, the Wild Ones’ "Wild Thing & quot; In 1965 Sybil Burton, ex-wife of actor Richard Burton, opened Arthur, a New York City discotheque that catered to glitterati like Rudolf Nureyev, Truman Capote, Tennessee Williams, and Liza Minnelli. For her house band, Burton hired away from the Wild Ones from the better-known Peppermint Lounge and made drummer Jordan Christopher her musical director.

Christopher and Burton soon became a couple. Burton arranged for Christopher and the Wild Ones to record an LP with United Artists, titled “The Arthur Sound-Recorded Live at Arthur.” The album was a mix of originals and cover songs but was hardly living. It was recorded in a studio with about 50 people standing around drinking and talking to create the illusion of a discotheque.

“The Arthur Sound” soon went silent, never rising above number 149 on the Billboard charts. After the LP’s demise, Christopher married Sybil Burton and left the band.

The Wild Ones, however, carried on, hiring seasoned producer Gerry Granahan to help them record a hit single. Granahan called songwriter Chip Taylor to ask if he had any new songs for the band. 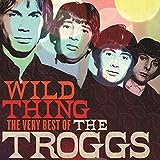 Wild Thing: The Very Best of
Buy on Amazon

Taylor, brother of actor Jon Voight, didn’t take long to come up with “Wild Thing.” With his own demo session already booked at a New York recording studio, Taylor churned out the tune in three hours flat.

Like most demos, Taylor’s “Wild Thing” was produced simply: a strummed acoustic guitar behind Taylor’s vocals. Taylor, who was not a great guitarist, strummed the track’s now-familiar power chords, pausing for intervals of silence throughout. Engineer Ron Johnson contributed a whistled section midway through the song.

Taylor gave his bare-bones demo of “Wild Thing” to Granahan but once in the studio with the Wild Ones. The producer changed the tempo and added a horn arrangement. Taylor has said that, like many sessions in the early sixties.

The Wild Ones’ recording was overproduced because arrangers of the era would write out every note for each musician. As strings and horns were often present, they became part of the record. Lost in the mix was Taylor’s use of the guitar as a percussive instrument.

“Wild Thing” by the Wild Ones died a quick death. But Taylor’s demo made its way to London, where it was discovered by Reg Presley, lead singer of the Troggs. When Presley first read the lyrics, particularly “You make everything… groovy,” he wanted to pass on the song. But after he played Taylor’s demo for the group, the Troggs were anxious to get the song on vinyl.

In 1966, the Troggs’ “Wild Thing” was produced by Larry Page and recorded on the second take at Olympic Studios in London. The group stayed true to Taylor’s demo; they only substituted electric guitars and replaced engineer Ron Johnson’s whistling with an ocarina.

The sledgehammer guitar chords and Presley’s growling vocals had critics label it “Neanderthal rock”; “Wild Thing” shot to number one and has been called a precursor of punk rock.