In the late ’70s, Rick Rubarth was a young singer/songwriter/guitarist working folk clubs in the Detroit area, when he heard his first harp on a recording by Robin Williamson. Captivated by the beautiful sound of the Caswell harp on the album, Rick vowed then and there to become a harpist.

But how do you get a harp if you’re a starving artist with no extra money for new instruments? Solution: build your own. It took Rick about six months working evenings in a small workspace in his apartment to make a very credible first instrument on which to learn how to play.

Thirty years and 1100 harps later, at the age of 52, Rick Rubarth has sadly become only a modest harpist, but fortunately for the harp world, he is one of the best builders on the scene today.

Being an instrument maker of any kind requires great sensitivity to sound and a compelling desire to make objects with one’s own hands. Rick possessed both qualities early on. He grew up in Dearborn, Michigan, a member of the musical family which would gather every Sunday after church at Grandma’s house to play and sing old-time classics from the Vaudeville era, like Sidewalks of New York and Bicycle Built for Two.

Strumming guitars were Rick’s father and older brother, while his mother played the piano. “She was the real talent in the family,” recalls Rick. “She could sight-read sheet music and play by ear as well. She played everything from Chopin and Copeland to Rhapsody in Blue and boogie-woogie.

Unlike a lot of classically trained players, she could improvise and pick things up by ear. I didn’t get any formal instruction from her, but I got some of the musical genres.

My dad did show me how to play guitar. By 14, I was writing my first songs.”

As for the handicraft side of the equation, Rick remembers always building something or other throughout his childhood. Model planes and boats were a favorite pastime, as were elaborate Rube-Goldberg-style constructions of cardboard, which would deposit a coin in a bank in the most complicated way possible. 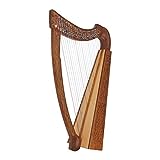 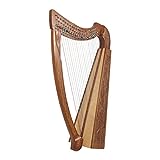 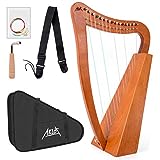 Rick had to eventually sell that first harp during one of those inevitable lean times any working musician is subject to, but thus was created an opportunity to build a new harp, which hopefully would sound even better than the first.

Throughout the early period of his career, he would build one or two harps at a time and then reflect on what he could change to improve the sound. In the early years, the goal wasn’t to make a living, but rather to learn a craft and discover the mysteries of an instrument.

In 1977 Rick moved to Ann Harbor Michigan where he worked as an industrial electrician in the auto industry. Most of his free time was devoted to making harps.

“I lived near the Stearns instrument Museum and the curator would let me into the back rooms to look at the old harps in their collections. These were important historical instruments — there was an early Morley harp and a very old copy of the Queen Mary harp — but they had fallen apart and were lying in pieces on shelves, awaiting some time in the future when they might be restored.

This was an unbelievable opportunity for me because I was able to see the inside! I took lots of measurements and observed the way the tops were carved and braced. It was a great foundation for my future education.”

Four years later Rick, now married, relocated to Denver, Colorado where he has lived ever since. He established a pattern of working part-time, gigging around town, and building harps. In the late ’80s, a music retailer suggested there was a niche available in the market for small harps, so Rick designed a 22-string instrument, which proved very successful.

Throughout the years he has built and sold over 700 of these affordable harps, however, larger harps have remained his true passion.

He currently devotes all his attention to his Merlin design, a 36-string harp that Rick feels is the pinnacle of his life’s work. Designing and refining the Merlin took over a decade of experimentation and hard work.

“A harp is a complex puzzle whose pieces must work in complete harmony,” he explains. “If you change any one element — the scale length of a string, for example, all the other elements are affected as well. You have to keep building new harps to test your ideas.

Sometimes the improvements are small; sometimes they are more dramatic. It all takes a lot of time and patience.”

The Merlin has a coopered staved back of solid maple, a soundboard of aircraft birch ply, and a truss-rod system in the column, which allows the harp to be extra strong but not too heavy.

But what really sets the Merlin apart is the unique system of struts inside the instrument that are made of a synthetic material, which, unlike wood, does not lose strength over the years. The struts relieve much of the huge tension (about 1100 lbs) that the strings exert on the soundboard, allowing it to move more freely and produce a stronger, richer sound.

I recently interviewed Rick to find out more about this unique harp.

Ken: Why do you use plywood instead of a solid spruce top?

Rick. The traditional solid spruce top will swell and shrink as much as a half-inch or more, which inevitably causes cracking. The special aircraft plywood I use is pretty amazing stuff. Five sheets of solid birch are laminated together to form a strong resilient panel one-eighth inches thick.

It doesn’t crack and it produces a fantastic tone. I still employ traditional graduation techniques — I thin areas of the top to enhance the vibration. I’m getting better sound than I did with my spruce soundboards. By the way, there’s a good discussion of this topic that you can check out on musikit.com.

Ken: You’re one of the few builders using fluorocarbon strings.

Rick: Yes. I think Kortier was the first and I jumped on the bandwagon early on. I’m convinced everyone will eventually be using them. The string is 20% denser than nylon. It’s great for the mid-range strings. I use nylon on the first octave and a half, then fluorocarbon down to the six bass strings, which are wound steel.

Unfortunately, you can’t just slap fluorocarbons on any harp and expect a big improvement — you have to build an instrument to specifically maximize what the fluorocarbons can do. It took me a lot of experimenting to get it just right.

Ken: I notice the Merlin has three sound holes instead of the usual four.

Rick: You have to be very careful about the number of square inches you devote to the sound holes. A cello, for example, can fill a concert hall, and yet the f-holes are a small fraction of the total surface area of the soundboard. For the best bass response, I don’t want the sound to just spill out. Instead,

I want the sound to be captured momentarily — to mature inside the box before it is released. I’ve found I can help bring this about by eliminating the lowest soundhole. I’ve got a special access plate in the base that you can remove to get to the bass strings when you need to change them.

Ken: What led you to add the unusual struts in your Merlin model?

Rick: The harp is a brutal instrument. All those strings are trying to rip the soundboard right out. Unlike a violin, which is dynamically balanced and can last for centuries, a harp is unbalanced and has a relatively short life span.

If you make a top thick in order to stand up to the string tension you impair its ability to vibrate. If you make it too thin it will just fall apart. So the traditional solution is to graduate the top — which means carving it thinner for the treble strings and gradually making it thicker towards the bass strings.

Wooden braces are also added to make the bass end stronger. I have spent countless hours trying to perfect my system of graduating tops to give the very best sound. But there’s always that inherent conflict in the harp between making the soundboard strong to stand up to string tension and making it light so it vibrates well and projects sound efficiently.

For a long time, I’d felt that I’d taken my harps to the limits of what traditional methods would do, and was trying to think of something new.

One day I saw a video of that famous footage of the Tacoma Narrows Bridge collapsing under high winds, with the roadway flopping around like it was a rug. I stared at the curved cables and the undulating deck and felt it was telling me something.

Eventually, I realized that I wanted to counteract string tension with curved struts just the way a suspension bridge counteracts the force of gravity with its curved suspension cables. In the Merlin, these struts oppose the string tension, relieving much of the stress on the bass end of the soundboard, allowing for much freer vibration.

You get a huge improvement in the quality of the bass notes and the harp has a longer lifespan.

Ken: The Merlin has an exceptional projection. I’ve heard it can hold its own in front of an orchestra even without electronic amplification.

Rick: I have gotten that feedback from a few of my customers. You know, the good projection has been a goal of mine for decades, but ultimately what I really want is full expressiveness across the whole dynamic range.

I want my harp to convey as fully as possible whatever the player is feeling inside. And I want it in the hands of as many players as possible.

I deliberately keep my harps free of expensive ornamentation so they can remain affordable. I’ve been a working musician my whole life, and I’m building for other musicians.

All I’ve ever tried to do is make the harp I would buy myself even if cost were no object. The Merlin is my favorite harp out there. I’ve solved the puzzle to my satisfaction. Now I just want to make lots of them, ship them out to the world, and keep a few for myself.