Diagnosing and Curing that Irritating Rasp That Comes out of Nowhere.

Unless a bee flew into your sound hole last time you were having a wholesome jam outside, that irritating sound you’re hearing is the dreaded fret buzz.

Plaguing every guitarist at numerous points of their playing lives, fret buzz occurs when the string you’re plucking or strings you’re strumming are vibrating strongly against the fretboard rather than above it. It sounds like your guitar has got a cold!

Except for falling out of tune, fret buzz is most likely the first “nasty” sounding phenomenon you’ve encountered in your playing. Don’t worry, though, it’s perfectly normal, and it happens to us all. Below I’ve listed all the possible causes and how to remedy them.

Frets are quite large, but strangely, you’re not supposed to use most of the space your fingers are afforded. The correct place to fret a note is just behind the bar of the fret.

The same goes for chords as it does for individual notes, so whether you’re ripping out a face-melting solo or strumming out a dreamy chord progression, you need to bring your fingers as close to the fret as possible.

When you fret a note the correct way, you’re pressing the string into the bar of the fret, meaning the vibration runs from the bar onwards, amounting to a sweet, clear note.

If you move your finger closer to the middle of the fret, you’re creating two separate vibrations, one along the distance to the fret bar, and another from the fret bar onwards. The former is what’s causing the buzzing or rattling sound.

Fret buzz will also occur if you’re not putting enough pressure on a note with your finger. New guitarists struggle with this for a while (especially during barre chords) until their finger strength builds up.

To be honest, if I’m attempting a particularly scary chord spread across six frets quite far down on the fretboard, it happens to me too, and I’ve been playing for over ten years.

In this scenario, the lack of pressure on the string is failing to isolate the vibration of the note. The vibrations run beneath your finger, choking out the note, reducing its purity and sustain.

The good news is that all you have to do to stop it is press down harder on the string. Easier said than done, I know, but with practice, your finger muscles will adapt to the challenge, and you won’t even need to think about it.

One final note on pressure before we move on: don’t press too hard. Pressing too hard won’t cause fret buzz, but it will tire you out and, in some instances, detune the note ever so slightly.

Strumming or Plucking Too Vigorously

If you’re finger placement and pressure is on point, but you’re still hearing that dastardly buzz, the issue might be with your other hand.

Strumming or plucking your strings too hard can also degrade the purity of the notes you’re playing. Why? Well, for a nice even tone and decent sustain, your guitar strings need to vibrate side to side.

When you strike them with the fury of the gods, you cause them to wobble up and down as well as side to side, adding a sort of natural distortion to the note.

So, try experimenting with some softer dynamics and see if the buzzing subsides. That’s it for technique suggestions. Now let’s consider some other possibilities.

You’d be forgiven for thinking that strings might start misbehaving when they get a bit older, but it’s actually a shiny new set of strings that poses the biggest buzz risk. Granted, old strings do go black and sound sort of dead, out of tune even, but that’s not what causes fret buzz.

Fret buzz is caused when you switch out your old strings for new ones of a different gauge, especially if the new gauge is thinner. Going from 10s to 9s, for instance, will cause a buzz.

The reason is that your guitar is set up for the tension of the original set of strings. When you use a different set, the tensions change, and the shape, or bow, of the neck changes. If the new strings are sitting too close to the frets, you may find that Steve Vai song easier to play, but buzz is inevitable.

You can think of your guitar’s setup as the tuning of the whole instrument, rather than just the strings. It determines the bow of your neck, saddle heights and the action of your strings (how high they are above the fretboard), pickup angle and height (electrics), and so on.

After the general build, it’s your setup that defines the feel of the instrument. The problem is that setups don’t last forever. As your guitar is exposed to different temperatures, the odd knock on your bedpost, and your ferocious playing, things start to fall out of whack.

The most common cause of buzz in poorly setup guitars is that the truss rod that runs through the neck of your axe is too tight. This brings the action of your strings down, which, in turn, causes fret buzz. To fix it, you’ll need to use an Allen key to loosen things up.

Your action can also be set too low via the bridge saddles, in which case, you’ll need to use a small Allen key to lift them up a bit.

Another noisy aspect of an “un-setup” guitar is that the frets have become uneven. Fret ware is natural and unavoidable, but eventually, they’ll need shaving, or you’ll have to book your pride and joy in for a full-blown refret. In fact, my trusty Telecaster is just about ready for one now.

The easiest way to solve these issues is to book your guitar an appointment with a professional, but if you invest in something like this musician’s tool kit, you’ll be able to do a lot of the maintenance yourself and save some money in the long run — hurray! 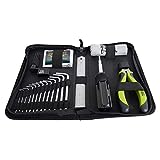 The only other reason you may be experiencing fret buzz is if there are some more severe structural problems with your instrument, at which point, you should contact a luthier.

There you have it, friends. Now you can root out the cause of that irritating fret buzz and make your six-string sing again. Enjoy!