Your garden variety guitar has six strings, which is why the term “six string” has transitioned from an adjective into a noun over the years.

Now if someone says, “Hey Johnny, bring your six string over next time you come around”, Johnny won’t be left wondering “Six string what?”. They’ll know to bring their guitar for a jam next time these two hypothetical rockers hang out.

These six strings are normally set to standard tuning which runs from top to bottom, E (low), A, D, G, B, E (high). Assuming the guitar has the standard 22 frets, that gives you just shy of four octaves, which is plenty for creating nuanced and textured music.

The story of the guitar and its strings doesn’t start and end there, though. On the contrary, six strings are basically just a point of reference from which we grow. Most guitar music is written on six-string guitars, so it’s a good place to start when you’re first learning.

Once you’ve got the hang of those six strings of yours, the sky’s the limit. In theory, a guitar can have any number of strings. Seasick Steve has made a name for himself playing his one-string Diddley Bow, while players such as Lucas Mann of Rings of Saturn have strings coming out the wazoo. If someone is willing to build it, and someone’s willing to play it, then it’s a possibility.

But before we explore modern guitars, let’s begin from the beginning and trace the guitar back to its stringy roots.

Did Guitars Always Have Six Strings?

Guitars are thought to have been invented in 15th or early 16th century Spain, but these prototypical axes didn’t necessarily have six strings, at least not yet.

The general consensus is that the first guitars probably had four strings rather than six, much like a modern bass guitar. These revolutionary Spanish luthiers probably thought…”well, we’ve got four fingers, so four strings sounds just right”.

As is the case in modern times, when players developed their skills on these early guitars, mastering the four available strings, their desire to take their playing further is what drove luthiers to innovate, adding more strings and lengthening fretboards.

Eventually, at some point in the 1700s, the first-ever sixth string was added to the guitar, and people must have liked it because that’s the way it stayed for a while. That is, of course, except for guitars with double course strings.

No one’s entirely sure when the twelve string first made its double-strung debut. Thought to have been inspired by Mexican culture due to their catalog of pre-existing string instruments with courses of doubled-up strings, the twelve string offers an almost organ-like timbre.

With two strings played as one, notes have a twangy, shimmering quality to them. Think those soulful opening chords of Pink Floyd’s Wish You Were Here, or the tapped refrain of John Butler’s Ocean.

Inspired in part by the harp, the seventh single course string was added to guitar designs in the early 19th century. While it never really had the same impact on European music as the six string, Russia’s own “gypsy guitar” or Semmistrannaya variant did find footing in the culture thanks to composer, Andrei Sychra.

The first recorded instance of a contemporary seven-string guitar was an Epiphone design commissioned by American jazz guitarist, George Van Eps, in the 1930s. Then in the 60s, he collaborated with Gretsch in order to craft a signature version of his seven-string dream.

From there, seven-string guitars fell into obscurity to a certain extent and weren’t frequently used in popular European music. It wasn’t until the late 80s and the early 90s that they found themselves in the arms of a new generation of guitarists.

It all started with guitar wizard, Steve Vai, and his signature Ibanez UV7 guitar. But not even he could spark the seven-string revolution alone. It wasn’t until younger musicians discovered his instrument that the seven string truly found its place in the modern musical landscape.

In burgeoning genres such as black metal, thrash metal, and eventually nu-metal, musicians were looking for ways to make their music sound heavier, more grotesque, deeper, and more visceral. The seven string helped them do that.

Nu-metal, in particular, played a big role in the resurgence, with bands such as Korn, Deftones, and Limp Bizkit putting that extra string to good use. For the first time in the guitar’s long and storied history, extra strings weren’t being used as a show of technical proficiency, but as a way to explore sounds and experiment with moods.

The Eighth and Ninth Strings

The bands that survived that 90s era have continued to play innovative music with these guitars, and as time passes, the necks of their signature models just keep getting wider to accommodate more strings. For example, Steph Carpenter of Deftones now writes music on eight and nine-string ESP guitars.

The Nu-metal era introduced the next generation of shredders to the possibilities of extra strings. Tosin Abassi of Animals as Leaders now famously plays an eight-string guitar of his company’s own design, and Joshua Travis of Emmure plays a nine string to achieve the band’s signature repetitive, chugging sound.

There are some truly monstrous guitars out there with more necks than the Hydra from Greek mythology and more strings than you could shake a stick at.

The single neck guitar with the most strings that ever I’ve come across belongs to YouTuber, Steve Terreberry. Playfully referred to as the “Djentar”, it’s essentially a bass/guitar hybrid, offering an incredibly wide array of frequencies.

Following close behind Steve and the Djentar is another YouTuber, Jared Dines and his eighteen-string monster that has a similar hybrid blueprint.

How usable these instruments are is debatable. All I know is that I’d hate to be the tech that has to restring and tune them! Call me basic, but I’m still very much in love with my six-string Jazzmaster decked out with a set of these classic Ernie Ball Slinky 010s. 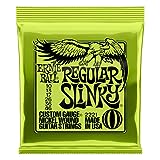 Don’t get me wrong, learning all your favorite songs by the bands that got you into guitar in the first place can be incredibly rewarding, as can writing your own music, but at a certain point, you can ignore improvisation no longer. As you advance as a guitarist, you won’t just be playing in a…