Technically, yes, you can definitely use your studio monitors as regular speakers, which is great news for you and your bank account. The last thing you want to hear after forking out for an expensive set of monitors is that you need to allocate your next paycheck to bringing some regular speakers into the fold too.

Unfortunately, though, much like many things in life, it’s not that simple. Sure, you can hook your studio monitors up to your computer or phone and listen to your favorite records, but you might notice something peculiar about the way they sound.

You’d think that speakers designed for use in studios would offer the best possible sound quality and that regular speakers would pale in comparison. Well, to a certain extent, that can be true, but you can’t really compare studio and regular monitors on the same level. These bits of gear have starkly different jobs.

The important thing to remember is that studio monitors are designed to give a “flat” response. I know that can sound confusing at first. Applying physical descriptors to an auditory experience seems kind of redundant, but it’s all we have to express the phenomenon.

The term I like to use to describe the sound of studio monitors is transparent. The general idea is that a studio monitor alters the sound as little as possible as it passes from the sound source, through their speakers, and out to your ears.

Regular speakers, on the other hand, don’t let the music get past without a fight. They might thicken out the bass, make the mids nice and punchy, smooth out the treble — no frequency is safe from their meddling ways.

Whereas studio monitors are transparent, regular monitors “color” the sound with their own signature sonic stylings. It’s why songs sound different from one sound system to the next.

As we’re using visual adjectives to describe this process, it helps to think about it in a physical context too. Say you’re uploading a photo to Instagram. You can choose to add any number of filters to your image, altering the way it looks and its mood. That’s what a regular set of speakers does, only to your music.

Just as you can alter the degree to which you apply a filter on Instagram, a decent set of regular speakers will allow you to alter their sound profile, but the filter is always there to some degree. Unlike on Instagram, you can’t switch the filter off.

This “filter” is a really great thing when we’re kicking back and enjoying our music or movie audio. It allows us to shape the sound to suit our personal preferences, but coloring the sound can be a huge problem for studio monitors.

The reason you don’t want your monitors to alter the character of a sound source is so you can mix and master a track in the studio. They allow you to hear the true tonal qualities of the recorded music.

When you can hear a sound file for what it really is, you can decide how to improve it. For example, a bass line might sound too thin. You can then fix that by layering on another track using the same notes but in sub bass frequencies.

If you were using regular speakers to mix, that thin bass might be boosted by the sound-coloring properties (or filter) of the speakers, and you wouldn’t realize it needed altering. Instead, you’d be throwing shapes around the room thinking you’d nailed it.

When you finally release the track, all that bass you were hearing through your speakers will be lost, as it was never really there to begin with. Next thing you know, Pitchfork has given you a 2 out of 10, and Anthony Fantano’s wearing the dreaded red flannel in the thumbnail of his YouTube review of your album.

To prevent that future from ever materializing, you’re going to need some studio monitors. My go-to at the moment is the Yamaha HS7. I bought a pair a year or so ago and I never looked back. Their sound is crystal clear and even, and they’re a decent size for a home studio.

For casual listening on your computer, I recommend something like the Harman Kardon SoundSticks III. They’re space-friendly, have a full-bodied sound, and they look so good, they were literally made into an exhibit at the New York Museum of Modern Art.

Every room has its own acoustic qualities. Some might have an echo, some larger rooms might imbue a sound with a spot of natural reverberation. The room is just another filter that alters the original sound source.

To maintain playback fidelity during the mixing process, a studio monitor has to cut out as much input from the room as possible. This is achieved by emitting precise, short-range audio that travels directly to the producer’s ear.

Conversely, the aim of the game with regular speakers is to saturate large areas with as much sound as possible. So, unless you’re going to be sitting right by your monitors, a lot of sonic details may not be as present when you try and use them for recreational listening.

Studio monitors and regular speakers are sort of like jam and jelly. They’re the same but different, which is where a lot of the confusion arises.

Unless you absolutely have to, the answer will always be a resounding no. If you’re used to hearing your music through something like these Bose-301 V Stereo Loudspeakers, transitioning to your studio monitors will turn all your favorite bops into flops. 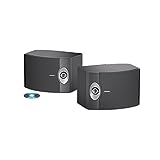 If you really want to master the art of mixing as well as enjoy your recreational listening sessions, you’ll need both a pair of dedicated studio monitors and a pair of regular speakers.